Some 300 kilometres from Kathmandu, unpaved roads lead through hills and fields to the small village of Jalapa. Jalapa is home to Sanad Rai, 45, and his family of four. Most people here live from smallholder farming and cattle and poultry farming. Up to 2012, they used kerosene and firewood for light and cooking. To get kerosene, they had to walk six hours to the nearest city and pay around 100 Nepalese Rupees, the equivalent of 0.80 euros, for a litre. Firewood was easier to get but had bad effects on the family’s health: “Especially my wife and children suffered because they spent many hours at home and were exposed to the smoke”, says Sanad. 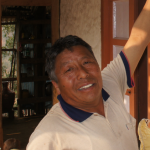 Especially my wife and children suffered because they spent many hours at home and were exposed to the smoke.

He could not bear this any longer: together with other community members, Sanad decided to switch to modern energy. The process started with a feasibility study, conducted by the Alternative Energy Promotion Centre (AEPC). AEPC submits report and financial breakdown to a review committee, which includes technical experts, banks and the government. After their approval, bidding was opened to private companies to install a micro hydro power plant in the nearby river Lumju Khola to generate electricity. AEPC helped to apply for a community loan through the Micro Hydro Debt Fund – a revolving fund that is used by rural communities that are unable to finance the construction of a hydro plant themselves. Additionally, the community received technical and financial support from AEPC and EnDev, for example through construction supervision, documentation and trainings for plant operators and user committees.

Jalapa was not the only village receiving support for their renewable energy project. Until 2021, EnDev Nepal has supported 30 rural communities to get access to electricity via hydro power through  the Micro Hydro Debt Fund. In addition to financial support through the fund and capacity building for the communities and operators, the project also creates linkages to the private sector and develops capacities within the AEPC and commercial banks.

In Jalapa, the Lumju Khola Micro Hydro Plant started operation in 2012 and has now provided energy to 195 households for a decade. Estimated cumulative savings of kerosene and firewood add up to an equivalent of 26 EUR per year. The cumulative GHG emission reduction is 51 tons of CO2e. With the expected remaining lifetime of the hydro plant until at least 2032, these impacts are expected to double Sanad recognises the importance of electricity for the use of new technologies: “We have now improved our water pumps, and agricultural processing and storage facilities. I use less firewood and spend a lot less money than I used to when buying kerosene. We are healthier because we no longer have to live in smoky homes .”

People use electricity for light and cooking, to go online and watch the news on television. All this creates a feeling of empowerment. The members of local women’s groups support each other in using the new opportunities to find employment, resulting in greater independence.  And Sanad is happy for his children, that benefit from an improved quality of education and learning materials, since the community established a computer institute at the local school.