A solar pump at an agricultural training centre in Benin has made the donkey work of irrigating fields a thing of the past.

Two kilometres. That’s the distance Odette Kpadonou had to trek in high humidity to fetch a litre of water from the nearest well. In the blazing heat, with the mercury hitting over 30 degrees Celsius. A huge effort to secure water for the vegetables she had planted. Today, the 19-year-old only has to walk a few metres with her green watering can to get from the tap to the young bitter leaf plants that she and her two colleagues are tending. The young women work on the Monseigneur Isidore de Souza training farm (named after a former Catholic Archbishop of the area) located in Tangnigbadji, just 60 kilometres outside Cotonou, the economic capital of Benin in West Africa. 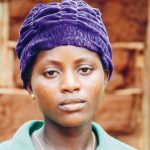 Life in rural Benin couldn’t be more different than that in the bustling metropole. The farm in the small village of Tangnigbadji, with a population of just 1,200, is located in the southern part of the country, and has no electricity, which is common enough in Benin. In 2018, only 30 per cent of the population were connected to the grid. Just two years ago, the training centre still needed a generator to supply light. This was not only loud, it also created an unpleasant smell and, more importantly, was costly to run. The monthly diesel bill came to at least 40,000 CFA francs, the equivalent of EUR 61. ‘Because the generator was expensive to operate, we could only run it in the evenings,’ explains Wilfried Godjo, the priest managing the centre for the past two years.

The exorbitant cost meant that installing a water pump to pipe water from the nearest well was out of the question. ‘Securing water was a constant concern,’ recalls Godjo. But this all changed in 2018. Godjo points to the solar collectors at the heart of the farm. They were installed by the Cotonou-based company Jesuton, which works in partnership with EnDev.

Light for reading and writing

With EnDev’s support, Jesuton is installing solar collectors on the farm in Tangnigbadji. Thanks to the solar-powered water pump, fetching water is no longer the difficult, time-consuming chore it used to be. ‘It has simplified our day no end,’ says Wilfried Godjo. Solar energy has also given the farm a new lease of life, powering a wider range of activities for the 37 young women who live and train there. They can now take a literacy course, for example. ‘This enables us to raise the level of training,’ adds farm administrator Eddy Guehou.

Better education for small farmers and a sustainable energy supply are crucial for agriculture, one of Benin’s key economic sectors. 80 per cent of exports originate in the fields, the most important products being cotton and fruit. Around two thirds of Benin’s 12 million or so inhabitants work in this sector. It isn’t easy work, however – the massive effort involved frequently generates low yields. According to the World Bank, more than 40 per cent of Benin’s population lived below the poverty line in 2015.

Paving the way for sustainable agriculture

Agricultural training centres like the one in Tangnigbadji are designed to boost productivity and support sustainability in the agricultural sector. The farm has set new standards in the region. From solar energy to cultivating vegetables under oil palm canopies – despite some initial scepticism, people in the surrounding villages are now being inspired by the new ideas.

Odette Kpadonou believes the training she is receiving on the farm in Tangnigbadji is a stepping stone to a brighter future. She has learned to plant seedlings and grow crops effectively and now understands how solar energy makes life easier. All positive experiences for someone who left school at 14. ‘I didn’t always understand what I was being taught at school,’ she admits. One of the difficulties she had was that lessons were taught in French. Although this is Benin’s official language, it is rarely used in day-to-day life, with the language Fon being more common in southern Benin, for example. As a result, a lot of children and young people find it difficult to follow lessons in French. This is not the only reason Kpadonou found school frustrating, however. ‘I also prefer practical work,’ she says, looking out over the bitter leaf fields.

‘I feel stronger and better able to fend for myself.’

The 19-year-old wants to be a vegetable farmer. She has the practical skills required to produce good yields. ‘I want to earn a good income.’ Kpadonou knows just how important this is for women in villages. ‘Many marry very young and receive no support from their parents. Or they have unplanned pregnancies.’ She is certain that the five year course will provide her with the skills she needs to secure a better future. ‘I feel stronger and better able to fend for myself.’

This story was published in akzente – The GIZ Magazine 03/21. The interview with the entrepreneur Christian Gbogbo can be accessed here, too.

Interview: ‘A kit solaire can change a family´s life forever.’