Home Impact Stories A community takes matters into its own hands

A community takes matters into its own hands

How reviving old plans for a hydro power plant in Honduras pays off.

In the rugged region of Lempira in Western Honduras, the communities of Las Dantas, Los Chiles and Playitas are connected by dirt roads that stretch across a mountainous landscape. The region is home to about 150 families and a population of roughly 800 people, who are represented by a committed leader: María Esperanza Cortés, aged 55. For years, María has fought to improve families’ living standards, including access to electricity. Until 2018, the communities relied on oil and gas lamps and firewood as sources of energy, which meant that they were not able to use basic kitchen appliances for food storage and cooking. 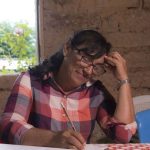 María recognised the importance of energy access for economic and social development. With this in mind, she worked tirelessly to realize a hydroelectric power plant for the communities – 15 years after it was originally designed by the government owned company ENEE. Unfortunately, the project development had to be halted due to lack of funding. In 2016, EnDev Honduras pledged to provide technical assistance to reinitiate the project. Taking the available budget into account adjustments were made to the technical design of the power plant, all involved stakeholders brought together and key equipment transported to the site, which had been in storage by the ENEE. But this was only half of the story: apart from construction and overcoming budget limitations, somebody had to resume responsibility for operation. In a community assembly, the three communities decided to organize themselves and started their own cooperative COMISERICLAL. It manages the day-to-day operation and maintenance of the plant. Supported by the National Electric Energy Company, and municipal and central governments, the Río Claro Hydroelectric Plant opened in December 2018.

In Lempira, life became much easier for the 800 people – as well as for the community’s six social institutions and three enterprises. María explains: “People can now refrigerate their food, so that it lasts longer. We have stoves, coffee makers and microwaves and can use these appliances whenever we want.” COMISERICLAL charges users a monthly fee to cover its running costs; energy has become reliable and energy costs have been halved. Turning a community-led project into reality has also empowered the villages and given them a sense of achievement, paving the way for future community developments. Together with EnDev, María will continue shaping the young people of her community into future leaders who will one day sustain and manage the hydroelectric plant.

The idea of accessing electricity generated by hydro power plants was born from within the community. However, this project was not the only one that was shaped by the extraordinarily high levels of ownership, solidarity and perseverance of the Honduran rural population: EnDev has supported a total of 8 micro-hydro projects in Honduras providing more than 5,700 people with modern energy.